Alex had a Lego party for his 9th birthday. Derek suggested making a Lego brick for the cake but I quickly dismissed that suggestion since it did not seem like a challenge. Alex provided me with this figure as inspiration for the cake. So I went for it and think it turned out all right. 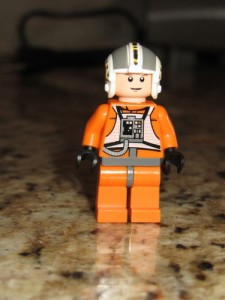 Step 1: You need: 2 boxed cake mixes, frosting dye, and 5 large containers of frosting. No, I don’t even consider making my own frosting. 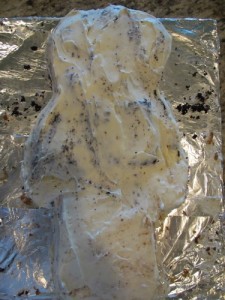 Step 2 – Place both cakes side by side and then carve out the general Lego man shape. Follow up with an initial layer of frosting. Place the cake in the fridge – it’s easier to put the next layer of frosting if the first layer is more solid. 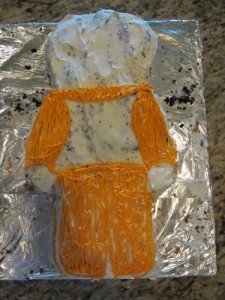 Step 3 – Create the bodysuit? armor? training clothes? with orange icing. I used clear icing bags and a basic frosting tip for the rest of the icing. 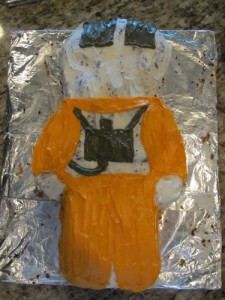 Step 4 – Use gray icing for the equipment and part of helmet. I started questioning my cake decorating abilities at about this point – hmmm… 2 hours till the party, I wonder if the grocery store could make a lego brick cake in such short notice? 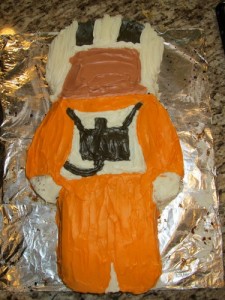 Step 6 – The first attempt at making “Lego skin” was too pink (very bad in the eyes of a 9 year old boy) so I tried again and got a brown color. Good enough. 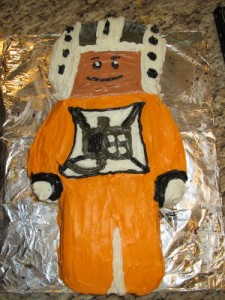 Step 8 – I added the red sections and called it done.

There were certain parts of the cake I wasn’t thrilled with but Alex was excited with the cake and that’s all that counts in the long run.