Display Board for Kids Room

Do you have a large frame you haven’t used in years? We have several and I decided to turn two of them into something useful for the boys’ room. Since our marathon displays have been in a closet for probably five years I decided it was time to change them up. 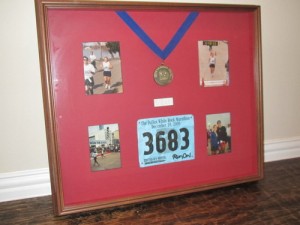 After taking the back off of the frames, I sprayed them with red paint. The boys have red beds in their room so I decided the frames would coordinate nicely with those.

The frames were 22 x 26 inches so we cut out a piece of wire that was 24 x 28 inches. This gave an extra inch on each side for bending and stapling.

I declined to include pictures of our bloody hands from the wire. This was for the benefit of everyone with a weak stomach. 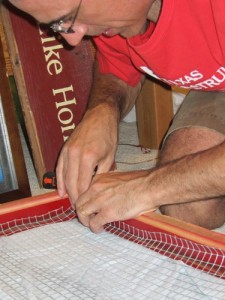 Derek bent the wire edges roughly 90 degrees using pliers. The bent section was the extra one inch of wire initially added on.

He then stapled the wire in place. 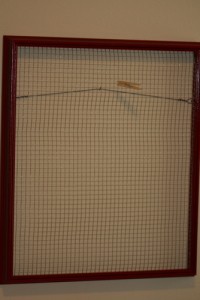 We hung the boards on the wall using the same wire that was originally on the frame. 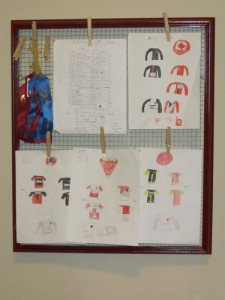 The boys were able to each place their special papers (drawings of their imaginary soccer teams) and ribbons on their own board using clothespins. (We didn’t make a cork board for the boys since having the push pins around would have been dangerous for Caroline.) 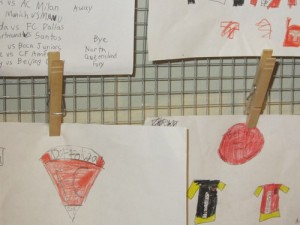 If I was a true “crafter” I would have decorated the clothespins with glitter or scrapbook paper but frankly that seems like too much work to me. 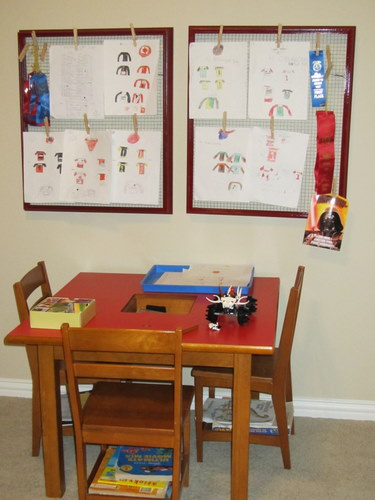 The final product – I love it!

4 Responses to Display Board for Kids Room