Sometimes events can be so built up for kids that the actual event itself can be a let down.

I was worried this was going to happen with my six year old when he went to his first college football game.

But this was not the case.

My sister Kelly is a TCU alum and flew into town for the TCU vs SMU game.

For two weeks before the game, Andrew and I would talk about going to the game. He would express some interest towards it but nothing over the top.

One day I clarified for him that only the two of us would be going to the game. His brother would be with my husband on a camping trip while I had secured a babysitter for his sister.

This new information sent his excitement level on overdrive. He was thrilled to be the only kid attending the game and to have all the focus on him.

He excitedly planned out how he was going to paint his face purple and where we would place the white letters.

Andrew slept in his newly gifted t-shirt (thanks Aunt Kelly!) and was ready to cheer on the Horn Frogs on Saturday morning. Once we arrived at the stadium parking lot, Andrew caught on to the idea of tailgating quickly. After introductions were made, he filled a plate for himself and sat down. In fact, he returned for food three times.

Here we are tailgating: 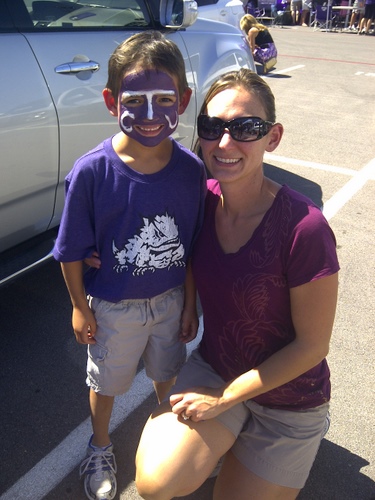 During halftime, we were standing in the walkway when an elderly man fainted right in front of us. He landed on the concrete and didn’t move. It was actually extremely scary. Paramedics came and helped him sit up – eventually. But Andrew was convinced he was dead. I tried to explain that he was fine (even if he wasn’t I was going to tell him he was) but only a much later visual sighting appeased him.

My caring son told me that if he died they should just throw the body over the football railing. Apparently, we have a ways to go in the empathy department.

Andrew enjoyed the game but thought the food was the best part. In addition to the tailgating food, he consumed dip-n-dots, a hot dog, half of my pizza, nachos, and another serving of dip-n-dots.

As if the stadium food wasn’t good enough, Andrew was thrown a chicken sandwich from the Chick-Fil-A truck while we were standing at a corner about a mile away from the stadium. He danced around and sang, “I got a free chicken sandwich!” Hold onto your stomach…he ate about half of it.

The following Monday he wrote about his weekend and illustrated it. As a parent this is one of my favorite pieces of work to come home from school. I love to see his perspective and see what was important to him about his weekend.

On the back side was his summary of the game. 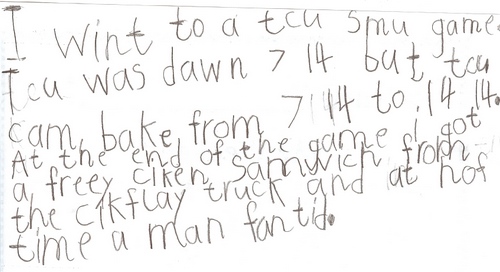 Here’s the translation in case you didn’t catch that:

I went to a TCU SMU game. TCU was down 7 to 14.  At the end of the game I got a free chicken sandwich from the Chick-fil-a truck and at half time a man fainted.

Andrew feel asleep on the way home but had wonderful stories to tell his brother the next day. His favorite of them all, “I got a free chicken sandwich….and it even had a pickle!”