At least that’s what the teachers tell me.

I have never actually seen her experience this joy but I’ll trust them.

I hear about her love of friends, putting crafts together, playing in the pretend kitchen, but when I show up the fun stops.

At the Christmas party all of the kids stood in front of the parents singing away while Caroline was in my lap burying her head.

At the Valentine’s Day party, she wouldn’t leave my lap for the group picture.

And at the end of the school year party she wouldn’t sing, get in a picture, or put on the decorated class shirt. 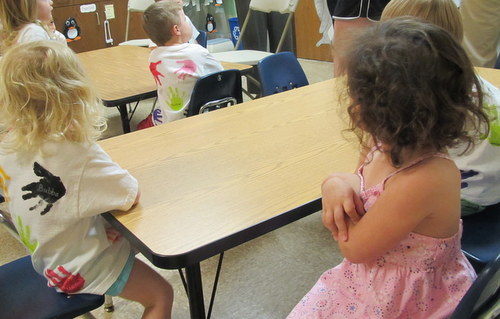 Notice all of the other kids wearing similar shirts?

Guess who refused to put one on? 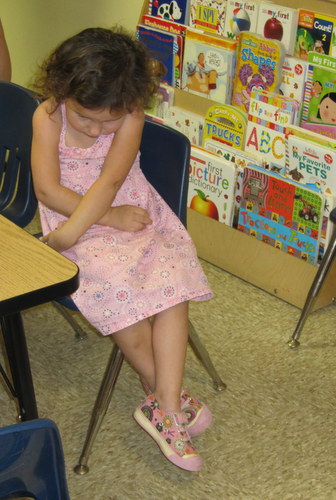 You could look at this as she’s asserting her independence, not following the crowd, thinking on her own, or maybe even that she has good fashion sense.

When asked why she didn’t want to put her shirt on Caroline said, “I’m brave.”

Whether or not she understands what that means you do have to admit she is pretty brave.

Imagine staring down and refusing to follow the directions of two fifty year old women when you only stand 32 inches tall all the while ignoring your mommy’s suggestions for putting the shirt on and being in the class picture.