I’m not sure but I think I just attended a cult meeting.

There were adults in matching uniforms, teenagers in costume, a rustic bridge, the passage of young boys, and ceremonial rules which required silence during a ceremony.

I just attended my first Boy Scout meeting with my nine year old and frankly, I’m more than concerned. 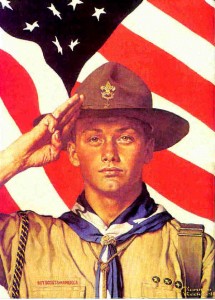 As I sat there tonight I thought, “I actually encouraged this. I’m the one who suggested Alex be a scout.”

Scouting? Must be all about camping and derby car races, right?

No, there’s more, so much more.

The meeting tonight focused on the bridging ceremony of two weblo scouts going into an  older boy scout troop.

The ceremony started out with the den leader telling the audience that this was one of the few solemn ceremonies in boy scouts.

Super. My two year old is with me and it’s the one night of a quiet ceremony.

Three high school boys then begin the ceremony dressed in Indian gear. I mean, leather pants, freaky looking colorful shirt, and a full on headdress. Not to be out done, the fourth boy wore a wolf on his head.

Then they began speaking. It was like a second grade play. No one knew their lines. As if all of the”uhs” and “ums” weren’t enough, there were several painful humming interludes.

I mean what teenage boys do you know want to play dress up and hum into front of a hundred people?

We left about twenty minutes into the ceremony.

I took my daughter’s, “I poopy,” as a cue and ran out of there as quickly as possibly.

This was my first boy scout meeting and quite possibly my last.

After all, I’d still prefer to think of boy scouts as more camping and less Village People.

This entry was posted in Alex, observations, parenting. Bookmark the permalink.