Eight years ago I convinced my sister to train for and compete in a triathlon.The race consisted of a half mile swim, a 25 mile bike ride, and a 6 mile run.

On race day we were excited yet nervous.

Due to my age group beginning before hers, I finished the race ahead of Kelly. I walked into the crowd and found an opening roughly 50 feet from the finish.

When I saw my sister I began cheering for her, “Go Kelly! You Got it. You’re Almost There!”

As Kelly ran passed me she looked straight at me and gave me the finger.

Sisterly love lets you get away with a lot. 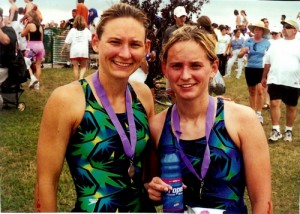 Every year or so my sisters and I try and have a Sisters Weekend. We meet up in a city, go the spa, and enjoy shopping and eating out.

Last week I spoke to Kelly on the phone and she mentioned scheduling a sisters weekend.

Awesome. I’m getting a facial, a pedicure, and a massage.

She also mentioned she wanted to get in shape and she needed a goal in order to do this. Kelly decided that training for a half marathon would be her focus.

Yes, great idea. It will definitely get you in shape.

“And I want you and Amanda to run it with me for our sisters weekend.”

Huh. That’s not such a great idea now.

Our half marathon is in 14 weeks.

Monday I went for my first run. Now normally I don’t run. In fact, I’m pretty sure I’d stick around to fight in a dark alley rather than try and run. Running is painful and I am bad at it. But I’m in this to finish it and to support Kelly.

So the kids got on their bikes, Derek pushed Caroline in the jogging stroller, and I shuffled along running and walking.

Well, Kelly, after completing those first two miles of training, I have a message for you: 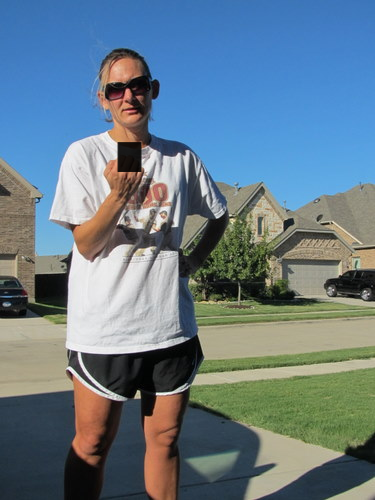 This entry was posted in activities, exercise, family, goals, observations. Bookmark the permalink.

19 Responses to Right back atya