Andrew went to chapel every Friday at school. One Friday he asked me to attend since chapel would be in the garden. I arrived right on time, located Andrew, and spread my blanket directly behind his class.

Chapel began with a prayer, some songs, and a little scripture reading.

The music teacher, who also doubles as the chapel teacher, began a mini sermon.

Loving God’s creatures and treating them with kindness appeared to be the main message she was trying to convey.

She supported her message by discussing ladybugs and how they are beneficial to gardens. Each of the three teachers then received a clear bucket which contained hundreds of ladybugs.

The children were ecstatic.

They clamored around the teachers trying to obtain a ladybug. Each class walked over to their specific garden and released the ladybugs. The children came back to the chapel area eagerly since they were promised another animal.

Next up, the discussion of earthworms and their valuable contributions to the garden.

Again, the teachers each received a bucket. When the buckets were opened, a few teachers gasped. With obvious displeasure their eyes pleaded with the music teacher, “Must we touch these creatures?”

Once I peeked into the bucket I was never happier to be the parent and not the teacher. The worms were enormous. Definitely larger than your average garden worm.

The idea with the earthworms was the same as the ladybugs. Release them into the garden so they will nourish the soil.

Initially, Andrew declined an earthworm but with a little coaxing from me agreed to hold one.

He giggled with delight as the earthworm moved on his hand. It was lovely to see him enjoying this experience.

Our picture perfect moment ended with a blood curdling scream from a little girl in front of us. She was distraught because someone had stepped on her worm. Other kids rose quickly to look. The quick movement resulted in additional worms being dropped and stepped on. This, in turn, lead to more upset children who also began crying.

The teachers tried to calm the students with soft and gentle voices, “Please don’t move. We’re going to release our earthworms in the garden soon.” This did little to rectify the situation.

Eventually, the teachers managed to ensure every student had a worm to release.

I was glad when chapel was finally over.

Fast forward one week to “Come Plant Your Own Plant Day” in the garden.

Andrew’s class returned to the garden for the first time since chapel. Each student held a flower or herb which they were going to plant.

As Andrew and his friends began digging, they discovered dead ladybugs everywhere. Hundreds of lifeless ladybugs lay on the ground. Apparently, releasing hundreds of ladybugs onto the same plot of soil is not the best idea. 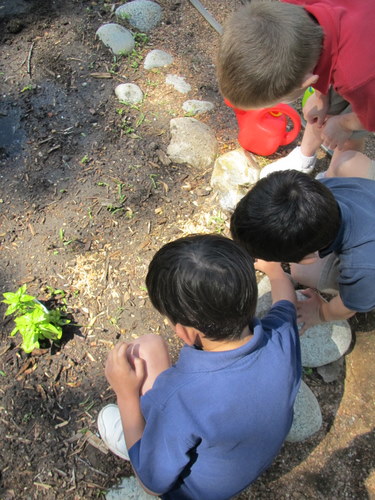 I must say the sermon was a success. The students were quite kind and compassionate while discussing the ladybug annihilation. 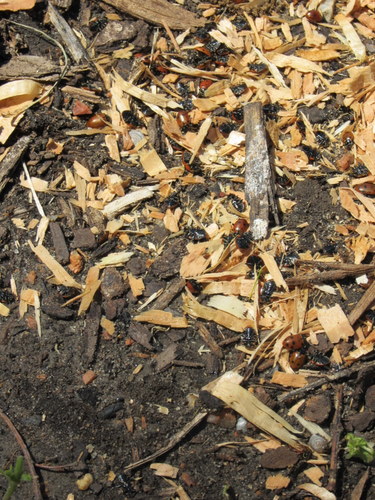 Not sure if you can tell but the ladybug carnage is above. I refrained from photographing the earthworm debacle.