Well, I didn’t plan on  being away from here for a week but that’s just how things turned out.

My husband and I were furiously finishing a project I had said yes to (more tomorrow) and only finished about  30 minutes before the completed products were due. Nothing like cutting it close here 🙂

A week ago the awful tornado in Moore, Oklahoma struck and killed so many.

The following day, the meterologists were telling us to expect huge storms with tornadoes a real possibility. Needless to say, everyone around here was on edge.

Before school, the kids and I brought a mattress downstairs and placed it by the tub. We then practiced getting into the bathtub and placing the mattress on top of us. It wasn’t exact but we did the best we could. 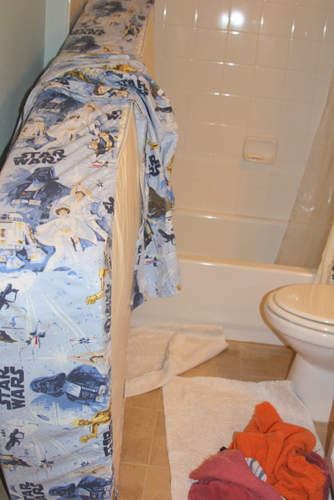 We also gathered bike helmets, important papers, a first aid kit, and a pair of shoes for everyone. We always have our bike helmets handy when it’s tornado time, in case things start to fall on us. It’s probably silly to have them but it always makes me feel better knowing they are around. 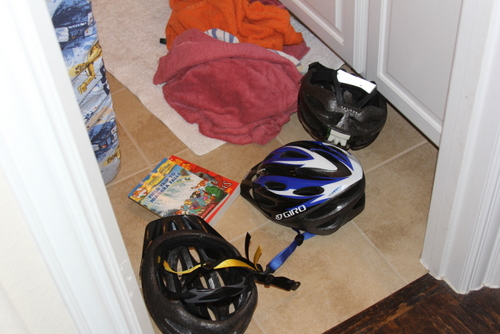 Around 1 pm things started to get rainy. At 2 pm Caroline and I headed over to the elementary school because the wind was picking up and really raining. Apparently, every  other parent had the same idea since it took me until 2:30 to get the boys. By this point it looked like a hurricane outside and my middle one started to cry. He was saying, “The tornado is going to get us.”

In our run from the school to the car we got soaked so everyone changed clothes once we got home. We turned on the tv and ate ice cream. Hey, it seemed incredibly reasonable to me, if the power goes out, the ice cream will go bad. Hence, we must eat the ice cream. After all, no one was in the mood for a frozen tuna patty so we went with next best thing.

I sent the kids to play while I continued to watch the weather reports on tv. All regular programming was ignored for constant weather reporting which just added to my nervousness.

Thankfully, there is no big ending to this story. The weather passed us by 4:30 pm, my husband came home at 5:30 to ask if it had even rained at the house. I will disclose here that I was ready to slug him at that point as my nerves were just about shot. We had frozen pizza for dinner, again ignoring the frozen tuna for something better, and continued on as normal.

Everything was normal except for the fact that my  four year old whining,”I wanted the tornado to come,” and I was busy pricing portable storm shelters online.

One Response to I’m Back & Thankful