Tonight Adam Greenberg is getting a second chance.

A second chance at playing in the major leagues.

Seven years ago, Adam was up at is first bat in his first major league game when the unthinkable happened.

He was struck in the head with a ball going 92 miles per hour.

He is the only player to ever have his career end on the very first pitch.

Since that point he has suffered with dizzy spells and nausea but has managed to play on several minor league teams though never returning to the major leagues.

In 2012, a Chicago Cubs fan and filmmaker, Matt Liston, started an online petition to get Greenberg his first official Major League at bat.

The campaign succeeded when the Miami Marlins offered him a 1 day contract to play in their October 2, 2012, game against the New York Mets.

I’m hoping Adam Greenberg makes the most of this opportunity and enjoys every minute of it tonight.

I was watching the Today show when Adam Greenberg found out he would get his second shot. And on Wednesday, I’ll be watching when they have him on in a post game interview. 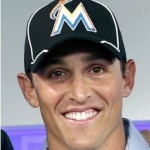