My Little Pony…Not for Little Ones Anymore

I turned on the television for Caroline in an attempt to distract her so I could cook dinner. Seeing as my only two choices were “Scooby Doo” and “My Little Pony,” I went with the later, and walked into our adjacent kitchen.

I listened to the show as I began cutting some fresh vegetables for dinner. As I listened to more of the dialogue I realized something was amiss.

My sisters and I had a whole herd of ponies when we were younger. First came the ponies which later morphed into the unicorns and seahorses. In fact, we were such My Little Pony connoisseurs we even had the plastic traveling case. I know…we were the cool kids. We played for hours on end with the ponies, combing their hair with the color coordinating brushes and creating stories for our menagerie. 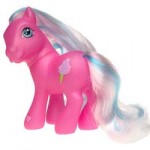 As I walked back to the television, I was convinced the soundtrack must have been switched with another show. I had always associated My Little Pony with sweet stories of friendship and this is not what I was hearing. Something must be wrong with the channel. I pulled up the synopsis of this particular episode…. shortly before I ended up changing the channel.

Here’s what it said:

Twilight and the rest of her friends join forces to fight the evil Night Mare moon, who has not only stolen the magical elements of Harmony from Equestria, but also kidnapped the pony kingdom’s beloved Princess Celestia.

Not quite the “My Little Pony” that I remember.

This entry was posted in animals, caroline, hair, observations, toys. Bookmark the permalink.

5 Responses to My Little Pony…Not for Little Ones Anymore