I took my 6 year old to the mall the other day and she had a serious case of the “I wants.” After telling her for the millionth time, “Okay, let’s add that to your birthday list,” she said, “But I want it now.” Actually it was more like, “But I want it nooooooowwwwwwwwwww.”

It was like walking the mall with Veruca Salt.

Just the other day she was disheartened to learn that she is not technically six and a half yet. She was absolutely convinced that she was 6.5 and the fact that she is almost there did nothing to relieve her stress. She understands that her birthday is still far off so she wasn’t buying the whole, “put it on your birthday list,” routine I gave her.

When we walked into Build-A-Bear it’s as if the heavens opened up for her. She looked around and promptly decided that she just had to have Risa. 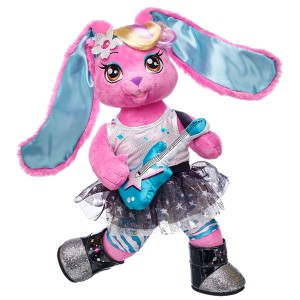 And then she was going to buy Viv and Teegan, the other rocker girls. And then something from the LEGO store. And then…it went on and on.

I told her that she was welcome to save her money and spend it however she liked.

She went home and promptly counted out (with help) the $3.23 she had in her piggy bank.

Risa costs $30 so I told her she had to keep saving.

I offered up unloading the dishwasher and folding the towels (bath towels, kitchen towels, washcloths). She quickly accepted and earned $1.00. I pay 50 cents a job.

She’s been working on this dream of hers for close to two weeks and she’s saved $14.73 – we run the dishwasher here a lot as well as go through tons of towels.

After 3 days of her asking me if she had saved enough yet I knew we needed a chart to help her track her savings.

This is what I came up with. 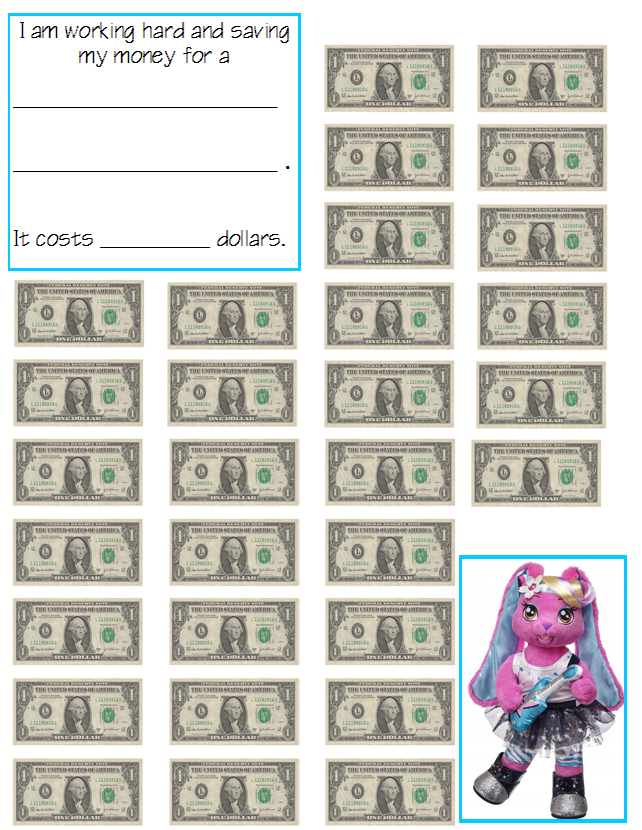 And here is her chart which is posted on the side of our refrigerator: 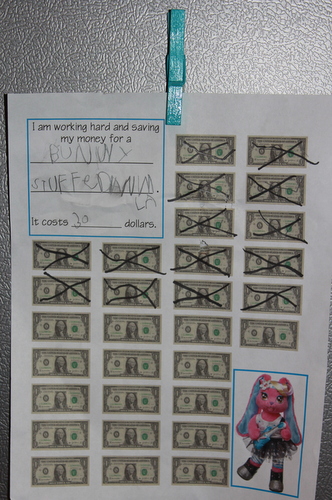 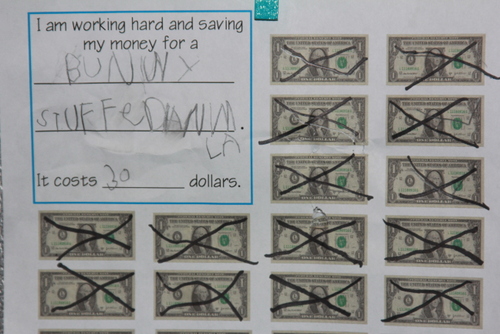 “I am working hard and saving my money for a bunny stuffed animal. It costs 30 dollars.”

Caroline keeps her money in a coin purse with a ziploc. Any change that doesn’t equal up to a 100 (a dollar) is kept in the ziploc until she can make a full dollar. Every time she counts up to 100 she gets to transfer that money to the change purse and mark off a dollar bill on her chart.

This has provided for lots of practice with coin names, counting by 10’s and 5’s, how many more until & how many already questions, and understanding equalities (2 nickels = 1 dime).

I’d say she is a good two weeks away from reaching her goal of $30. There are some days she is more motivated than others and that’s just fine with me…although I am enjoying not unloading the dishwasher quite a bit.

This entry was posted in budget, caroline, forms, parenting. Bookmark the permalink.