Driving home with him is always entertaining because it usually involves detailed descriptions of an animal video game he’s played at a friends house.

Tonight, we talked about flamingos.

While he was describing the enclosure he set up for the flamingos in the video game, I asked, “Why are flamingos pink?”

Andrew said, “It’s because of the carrot juice in the shrimp they eat.”

“You mean the carotene in the shrimp?”

“Yes, that’s what I said. The carrot juice that’s in the shrimp.” 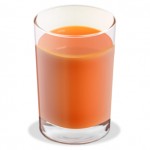