I was at the Cheesecake Factory the other night when I watched a young girl make a complete fool of herself.

I had just eaten dinner with a friend when I decided to stop by The Cheesecake Factory and grab a surprise treat for my husband.

Ahead of me in the to go line were three young women who couldn’t have been older than twenty-two. Two of them ordered quickly while the third hummed and hawed over her decision.

I was thrilled when she decided on the Chocolate Godiva Cheesecake.

Little did I know that would be the end of my excitement for awhile. 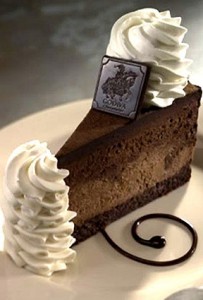 The woman behind the counter prepared a piece of the cheesecake and placed in the to go box.

When the young woman saw the piece of cheesecake she flipped.

“This isn’t what I ordered! It doesn’t even look the same. I said the Chocolate Godiva Cheesecake.”

“Ma’m this is the Chocolate Godiva Cheesecake.

“No it’s not. Just look at this piece. It looks pale and white compared to the piece in the display.”

“The piece in the display has been sitting out for awhile. I got this piece from the refrigerator so it’s a bit fresher.”

“I didn’t say I wanted a fresher piece! I want one that looks like what I ordered. This is just ridiculous. Why are you trying to give me a different piece of cake?

“Ma’m, the piece I prepared for you to take home is what you ordered.”

“I ordered the Chocolate Godiva Cheesecake and this doesn’t look anything like it.”

At this point the manager appeared, quickly resolved the issue, and apologized for the misunderstanding.

I meanwhile, continued to stand there stunned.

Who is this person? Why does she think it’s okay to act this way?

While my husband was thrilled with his cheesecake surprise I’m not sure the young woman had the same reaction when she got home and finally tasted her less than fresh display case cheesecake.

This entry was posted in food, observations, restaurants. Bookmark the permalink.