Since it’s springtime we have an abundance of rabbits in our neighborhood. We often see them early in the morning munching away on the grass. While the kids love seeing the rabbits, I quite dislike the thousands of rabbit droppings in our backyard. However, having tons of rabbit droppings does not dissuade the boys from playing tackle football or inspire us to actually do something about it.

Caroline and Andrew asked to play in the backyard on Sunday. Immediately after opening our back door we saw a rabbit run from the play set to the middle of the yard. A mini showdown occurred as we stared at the rabbit and he stared back. Thirty seconds later Caroline went running toward the rabbit hollering, “Ahhhhhhhhhhhhhhhhhhhhh.” Thankfully, the rabbit took one look at the wild haired child and went under the fence.

Following Caroline’s cue, Andrew began screaming, “We have to follow it! Get the keys!” I weighed my options of either staying in the yard and dealing with their whining about why we didn’t follow the rabbit or just getting the keys to the back gate and following the rabbit. Following the rabbit won out.

After opening the gate my two explorers quickly spotted the rabbit sunning himself 20 feet away.

They were on him in no time. Barreling toward his resting spot they were surprised when he took off. Quickly scanning the area, Andrew located the poor fellow under a tree. Caroline kept yelling,”Wabbit. Twee,” along with “Wabbit. Here!” The rabbit wisely ignored her command to “come here” and stayed put. 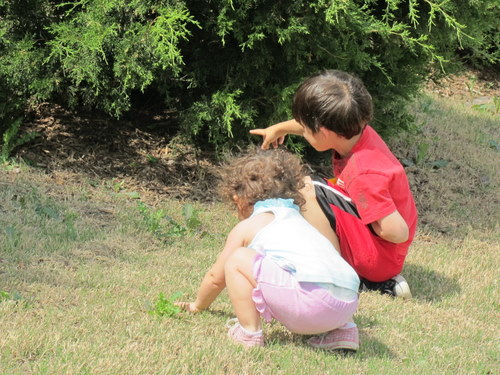 Andrew decided to get closer. Unfortunately, his trusty sidekick was still next to him yelling, “Wabbit. Here!” So the rabbit ran. My little Diego and Dora ran too. Tree after tree they followed the terrorized animal. He finally wised up and escaped under someone’s fence. 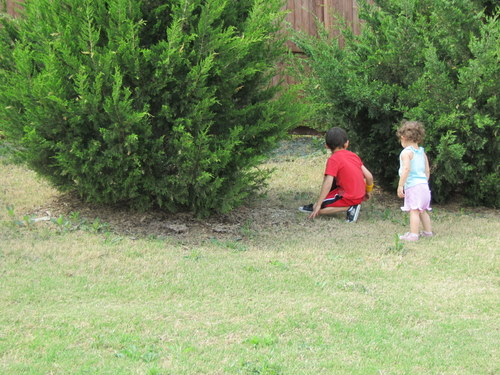 I am fairly convinced their tactics won’t land them a show on Animal Planet anytime soon.

2 Responses to Hunting a Wabbit