Since we are just 2 days away from being done with school this year I thought that now would naturally be a good time to share some spring break photos. For their Christmas present this year, my sister and her boyfriend gave our kids a ski trip to Blue Mountain in Ontario, Canada. The kids and I had never been on skies and my husband had only been on once decades ago. We were excited but a little nervous.

We flew up to Toronto and then took about a two hour drive to Blue Mountain. Our hotel sat right on this skating pond and had little shops all around.

Here are Caroline and Andrew wearing their “Dallas Winter Wear.” We had to borrow real ski clothes from Derek’s sister and all her generous friends who let us borrow clothes. 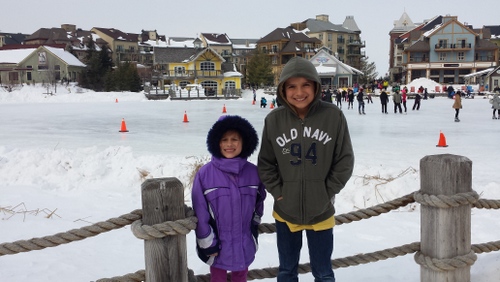 And yes…we did go swimming on this snow covered day.

We signed up the kids for ski school which was from 10:00 – 3:00 everyday (with a 1 hour break for lunch). Caroline had just turned 6 ten days earlier so she qualified to go to all day school with the boys. She was a little reluctant on the first day but went along since “her boys” were with her. 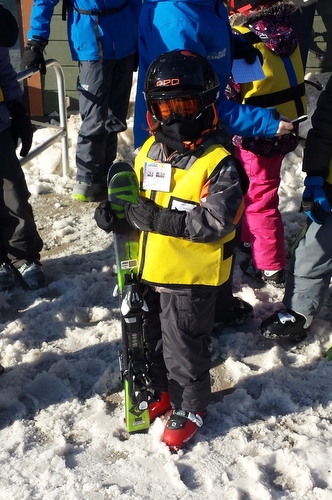 She’s the littlest one on the right. 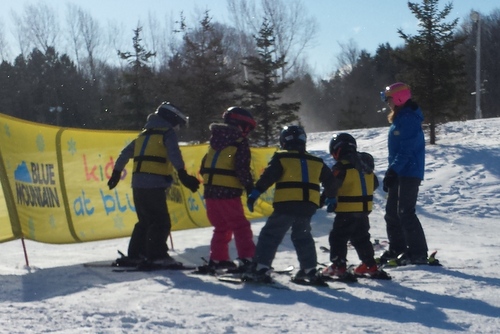 It was amazing to see the kids in ski school. The instructors had the kids going up the magic carpet (ride that you stand on to get you up the hill) almost immediately and even more impressive is that they were coming down almost as fast. Our kids enjoyed their first day but I know Caroline definitely got tired of falling down.

Once the kids were situated in their lessons, all of the adults took a beginning lesson where I promptly fell down. Did I fall while moving? No. I fell while standing still listening to the instructor. Once the beginning lessons were over the instructors sent us over to practice on the same little hill the kids were already practicing on. My first attempt at getting on the moving magic carpet? I fell. They had to stop the whole dang thing for me to get up. Complete fail.

Once we had gone through the various stations and practiced what we were supposed to practice my sister and I asked the instructor what was the next station. The guy pointed up at this enormous mountain and said practice on that. What? That can’t be. There must be more stations. After practicing on the baby hill a few more times my sister and I worked up the courage to try Mount Everest. Trust me. It seemed enormous from the bottom.

When  my sister and I attempted the chair lift for the first time we got on with two other people. For some reason they never pulled down the bar which is supposed to go in front of you so to say that my sister and I were panicked for about 4 minutes is a complete understatement. We held on for dear life and were never so glad to be at the top of a mountain.

Until we looked down to the bottom and sheer panic took over.

Somehow we each manged to get down. I’m pretty sure toward the end I was racing down the mountain at 40 miles an hour. After that experience we promptly went back to the baby hill and told the instructors that we needed some serious help. With some help and a private lesson the next day we did get a little better but it’s a safe bet to put your money on Lindsay Vonn this world cup racing season and not one of us.

After ski school ended at 3:00 we picked the kids up and headed back to the hill/mountain until 4:30 everyday. For us it was like when we go to Disney – up at the crack of dawn and at the park until the fireworks at night – we were committed all day.

The kids at the top of the practice hill 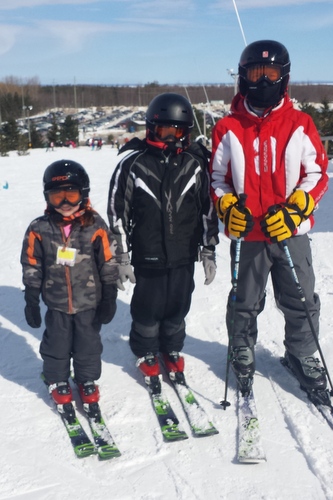 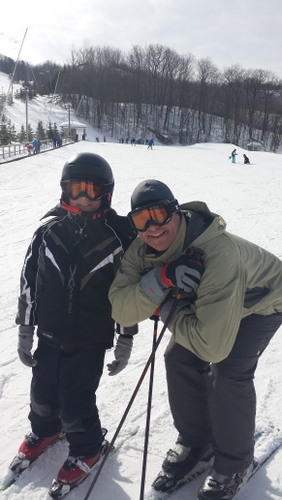 Alex, Dad, and Caroline (in her tuck) coming down the hill 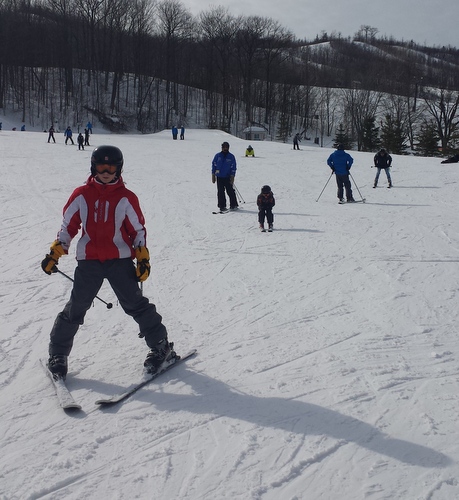 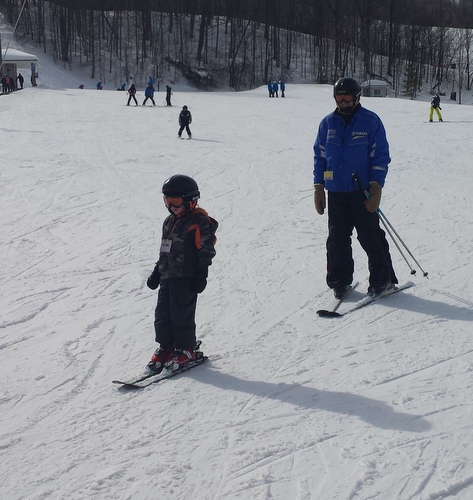 At the end of day one the boys were begging to go up “Big Baby,” also known as Mount Everest to me. I kept saying no but their dad and uncle won out (caved) and took them up. Once Andrew got off the ski lift and looked down the mountain he threw himself down on the snow and said, “I can’t do it. Get me down.” He was completely heartbroken to find out that he had to ski down. It took a loooooong time for him to come down the mountain with my husband. He’d ski a tiny bit and then fall. Ski a tiny bit and then fall. And so on. For a long time. But…he finally made it down and promptly announced that he was done for the day. 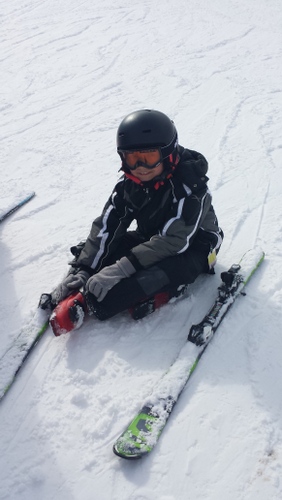 After spending 6+ hours on a cold mountain what treat do you naturally turn to? 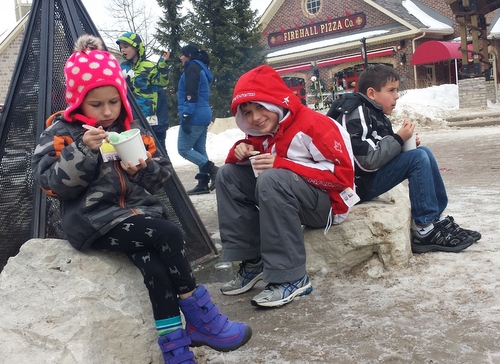 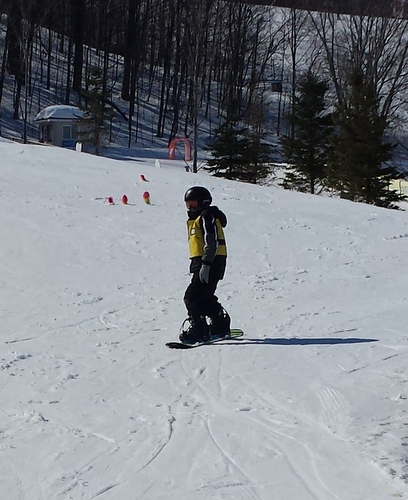 Lots of falling on your bum is apparently par for the course when learning to snow board. 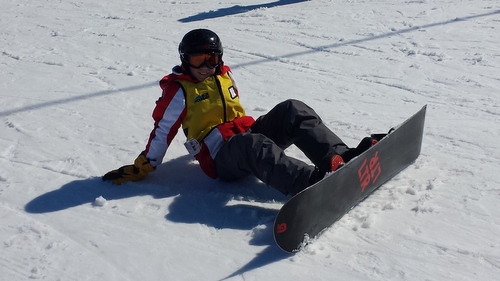 Alex ended up loving snow boarding so much that he took lessons again on his 3rd day. He impressed everyone by even going down some blue trails on the 3rd day. 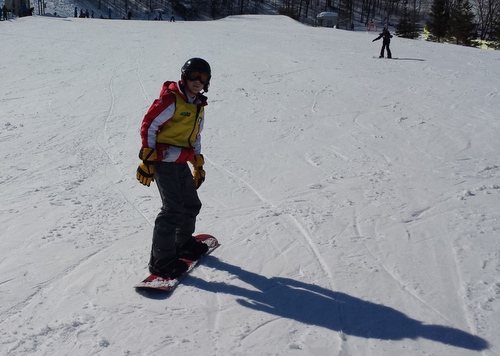 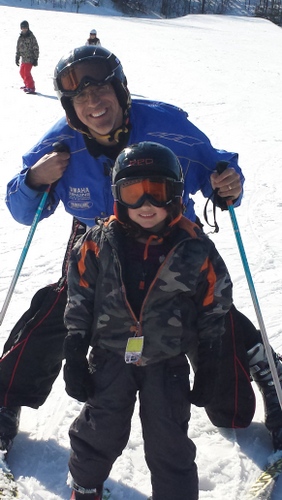 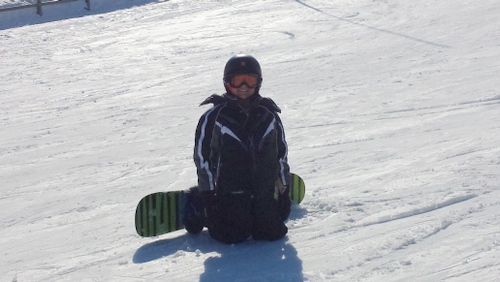 Dad and Caroline going up the magic carpet like pros 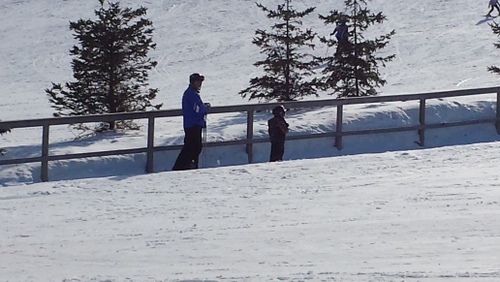 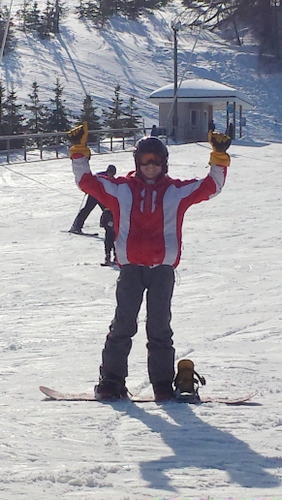 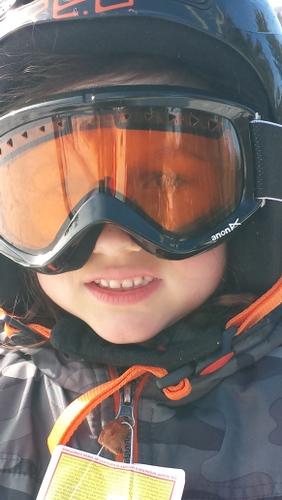 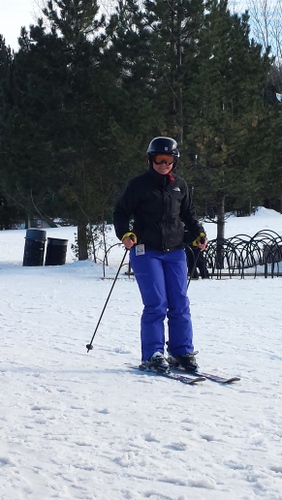 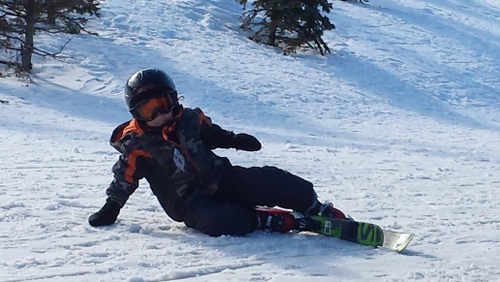 Finally a picture of me coming down Mount Everest / Big Baby. 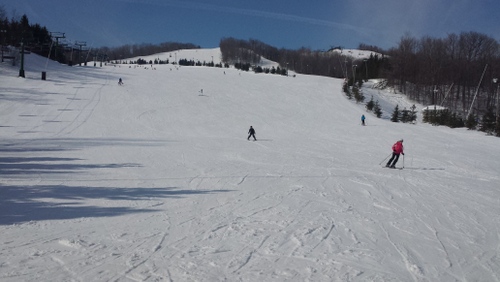 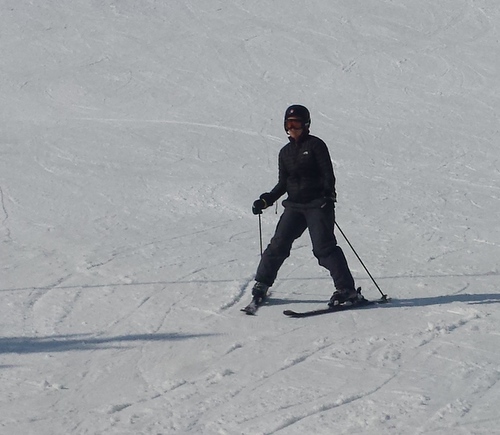 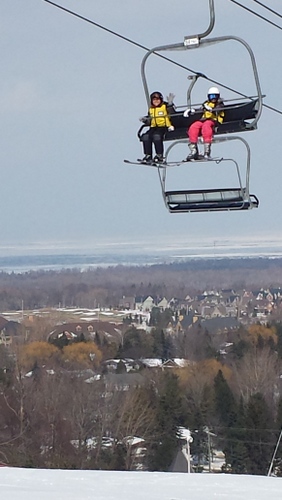 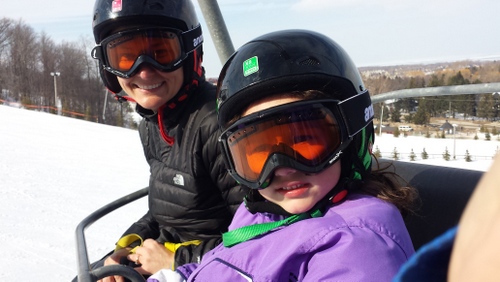 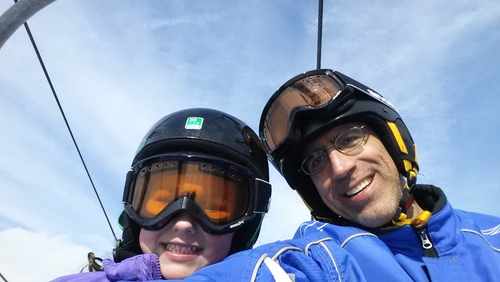 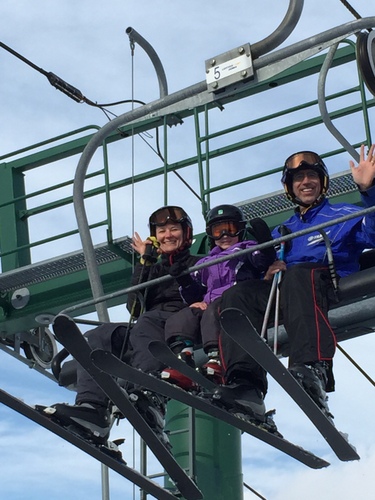 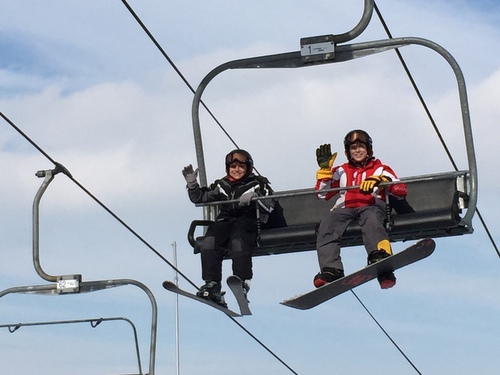 Day 3 – Last run of the trip – from the top down – Andrew, Alex, Derek (Dad), Caroline, & Uncle Duke – not pictured, me: I was too slow and still making my way down Mount Everest / Big Baby. 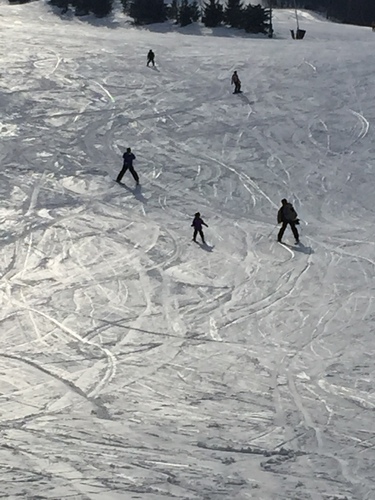 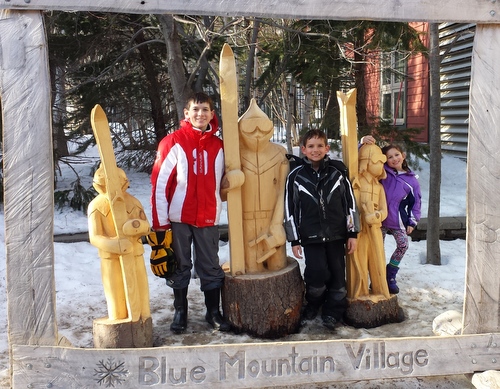 And finally a family photo at the top of the mountain…could it be we already have our Christmas card photo in March? 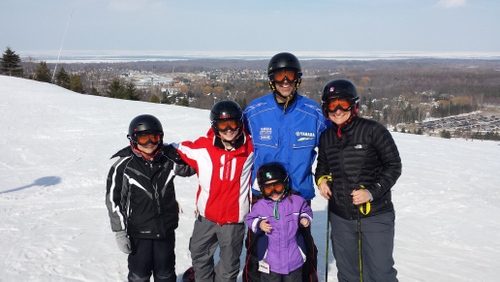 2 Responses to Skiing for Spring Break