My Potential According to a 4th Grader

I am working again this year as a part time tutor to elementary school kids.

Over the past 17 years I’ve been a special education teacher, a math support teacher, and finally a tutor.

I actually love the tutoring job because it’s so flexible – let’s me be at home and at work.

But I love it even more because of the kids.

I work with kindergarten, first, second, third, fourth, and fifth graders and they all say the funniest things.

Edward, one of my regular 4th graders, and I were working on division together. One of the methods the kids are taught now is something called “Big 7.” It’s basically a way to regroup using groups of a certain number. Here’s an example I found of what it looks like: 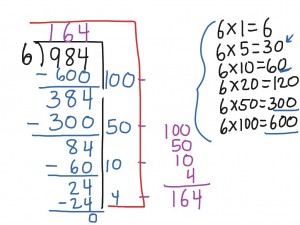 Anyway, I love to teach this to kids. It always looks like such a nightmare of numbers and they give up pretty quick since teachers always jump in too far too quick. Start by dividing by 8? Not yet I always want to scream. Start with the 5’s, those are easy numbers for kids.

And let me clarify for all those parents who are about to yell at me that they didn’t learn it that way, or its dumb, or but I don’t understand, or but kids just need to learn the right way….they will eventually learn the traditional method. This is about understanding the concept of division.

So back to Edward and I.

We were working in his classroom working on Big 7 and he was getting it!

It’s at about this point that he turned to me and said, “Mrs. Mac, do you think when you grow up you are going to be a teacher? Because you are a really good helper.”

To be honest, when the kindergarteners ask how old I am, I always have them guess. Their top answer choice is always…teenager. When I tell them to guess again they usually say 50. I’ve learned to stop asking them once they say teenager.

To Edward I said, “Thanks Edward. I think that might be a good idea. Maybe I’ll work on that. Now amaze me with your division skills on the next problem.”

This entry was posted in observations. Bookmark the permalink.

2 Responses to My Potential According to a 4th Grader