The – Shrek the Musical – Party

For my daughter’s 5th birthday party she decided on a “Shrek the Musical,” party. We found this musical on Netflix and she feel in love with it, watching it probably 20 times. 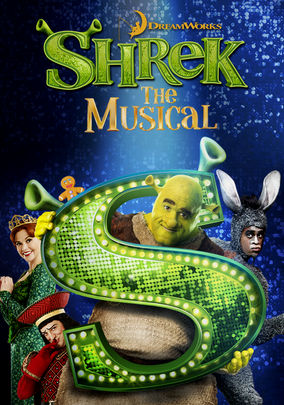 In my opinion, this musical is FAB.U.LOUS! Go and put it on your netflix list right now!

For days after we watch it, I’ll hear my family humming the tunes or sometimes they bust out with the words. Alright, I’ll admit it, I sing and dance around the house to it as well. 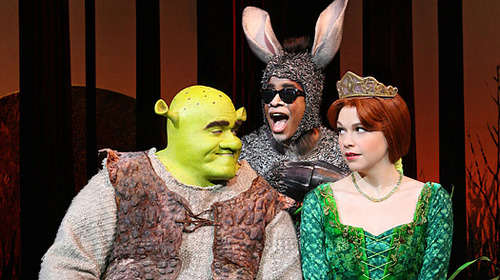 A Shrek the Musical 5th Birthday Party. Hmmm…I put my thinking cap on and came up with what I think was a pretty fun party. So here’s the party recap:

Caroline greeted her guests outside with some sidewalk chalk paint. Using cornstarch, water, and food coloring I used this recipe to make the paint. 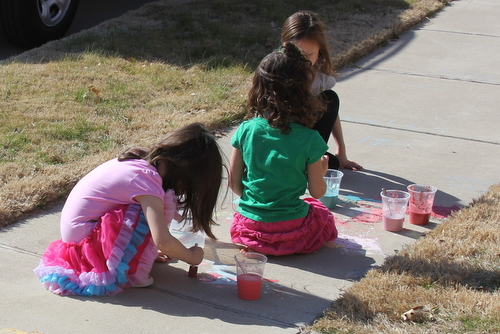 After everyone had arrived at the party, we went inside to watch our first clip of the movie which was the opening scene introducing Shrek. After watching the movie for about 8 -10 minutes we stopped and played, Stinky Shrek, our own version of hot potato. Several years ago my mom gave us a hot potato game with a built in beeper. I simply covered the hot potato in green fabric and we played Stinky Shrek – last person with the Stinky Shrek (hot potato) was the winner. 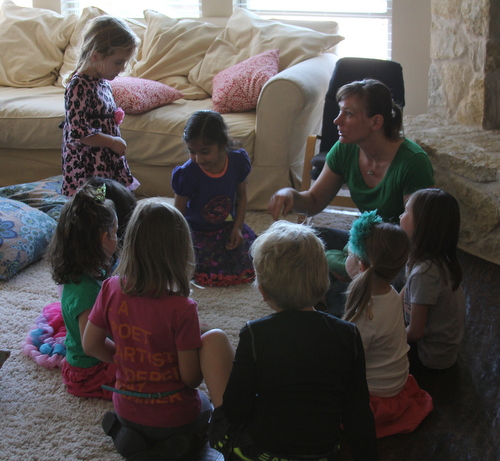 We then watched another clip of the musical which introduces the donkey. 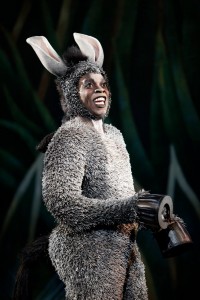 After the clip we played – Pin the Tail on the donkey – a classic birthday game. I once again used our tracer and made the donkey out of construction paper. 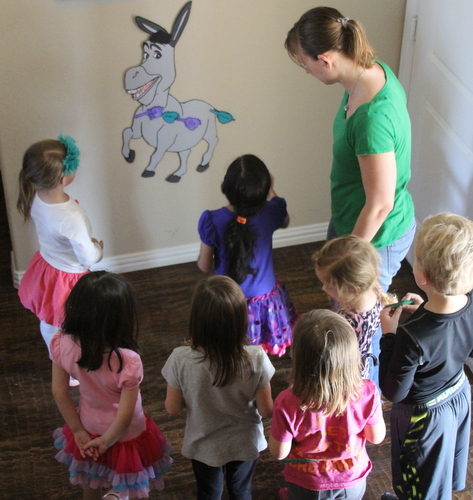 Next was a clip which introduced the gingerbread man and Lord Farquaad. 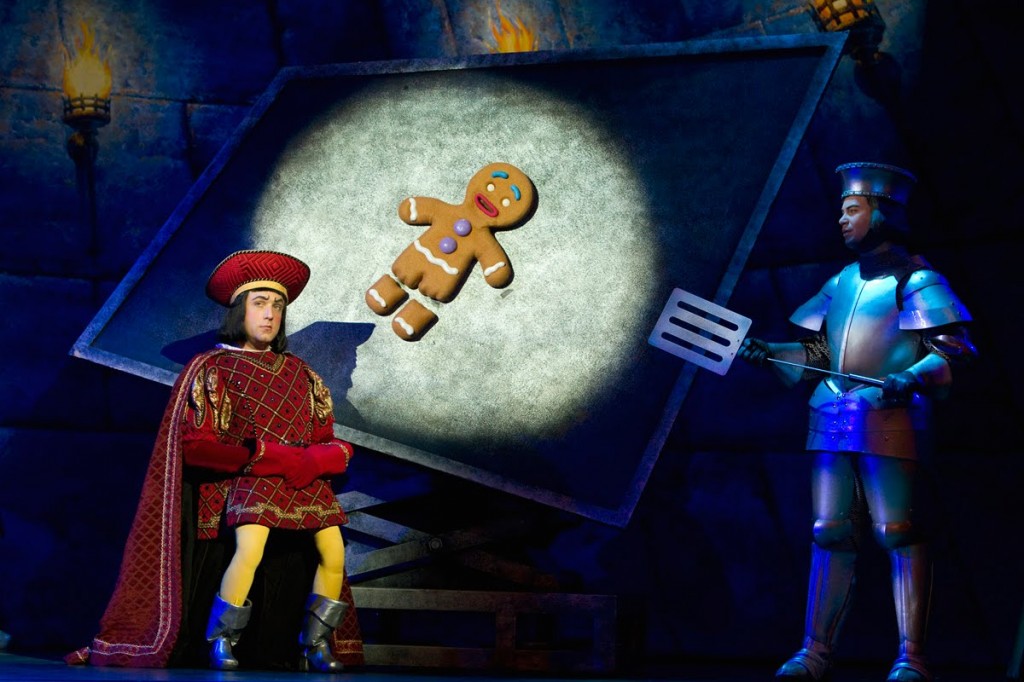 Since I had enough to do to get ready for this party, I paid a friend who was just starting up a baking business to make sugar cookie gingerbread men for me. The kids enjoyed decorating their gingerbread men with frosting and candy. I had little baggies for the kids to take the gingerbread men home in but that did not work out since everyone wanted to eat their creation immediately. 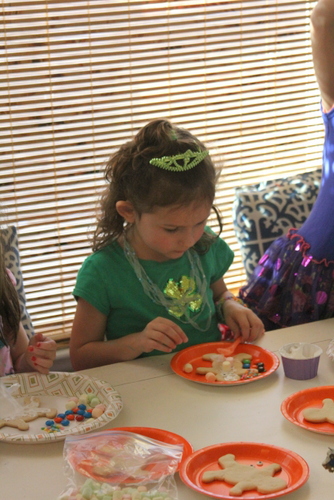 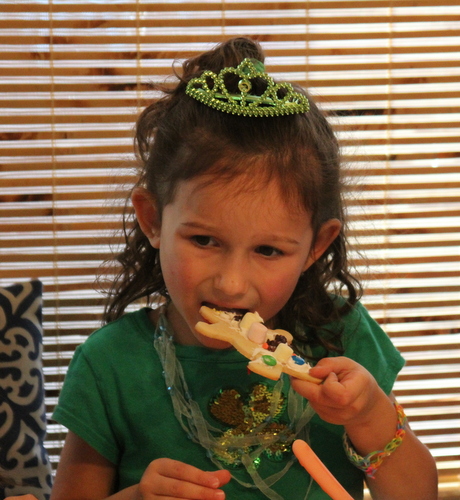 Next up was the musical scene which introduced Princess Fiona. Sutton Foster plays Fiona in the Netflix musical and she is just outstanding. She was nominated for a Tony for this role. 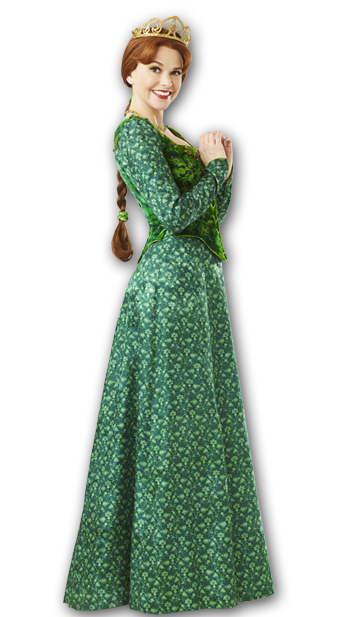 To celebrate being a Princess like Fiona the girls made princess necklaces. The necklaces were plastic beads with large holes through the center. I also gave the girls a castle charm that they could place somewhere on their necklace. Since this party was for 4, 5, and 6 yr. olds I thought using a needle and stretchy thread might be a little difficult for them so I glued (using a glue gun) the needle to the piece of thread so the needle couldn’t fall off. I then glued a piece of fabric at the end of the thread so that the plastic beads wouldn’t come off on the other side. The girls really enjoyed making their necklaces. It was fun to see some of the girls where their necklaces to school the next week. 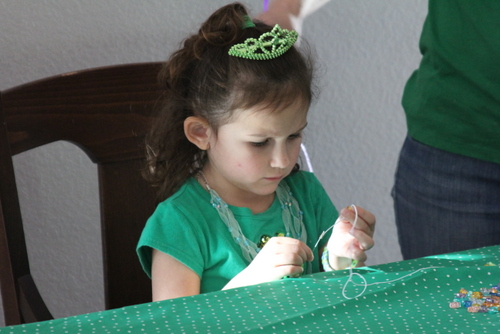 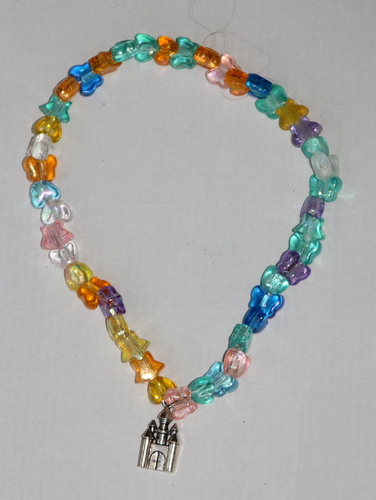 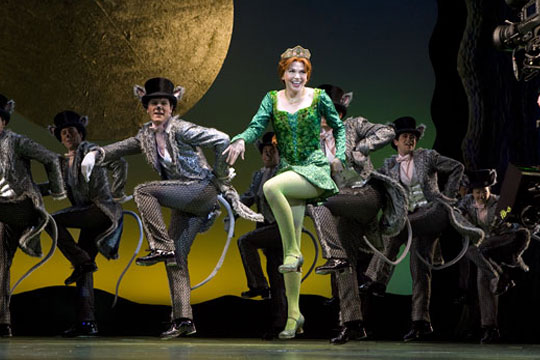 I decided to make tap shoes for the girls – the cheap way! I bought bottle caps at Hobby Lobby and glued (with a glue gun) them to a rubber band. I placed the hot glue in the bottom section of the bottle caps. The “tap shoes” were easy to put on since they just slipped right over their shoes.

At this time the girls also received their green  Princess Fiona crown – the same one Caroline had been sporting the whole party. 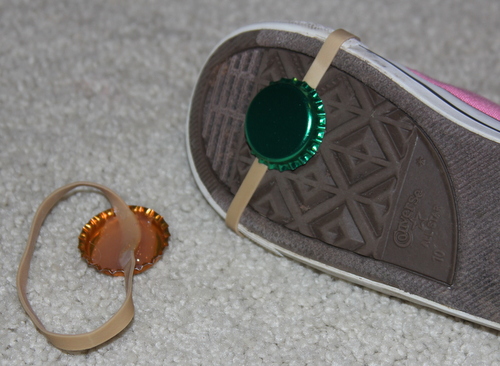 The girls “tapping” like Princess Fiona in our garage. 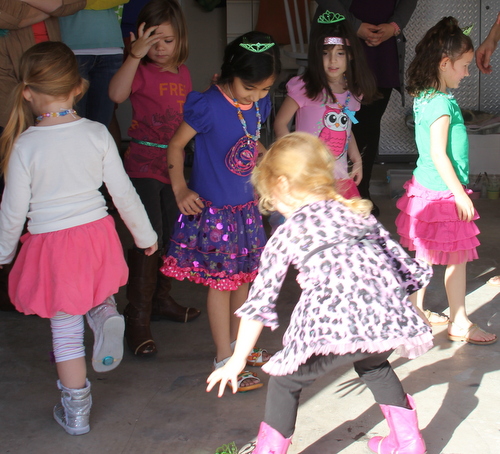 Last up on the party agenda were cupcakes with Shrek character toppers. Normally I try and make a character cake for birthday but Caroline requested cupcakes so cupcakes it was. She helped me choose the characters she wanted on the toppers and we printed them right out. 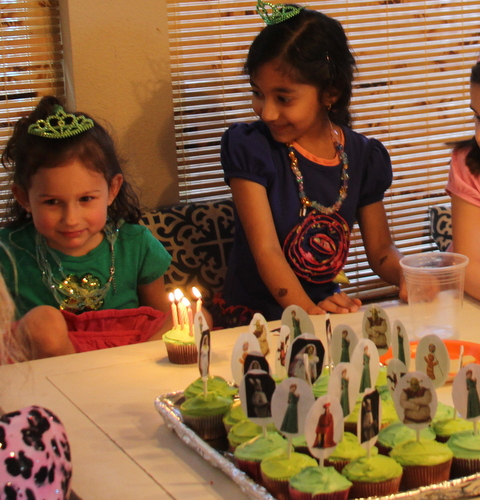 A “Shrek the Musical Birthday” party for my daughter’s 5th birthday.

I think I enjoyed planning it as much as she enjoyed sharing it with her friends.

4 Responses to The – Shrek the Musical – Party