But you see, there’s this adorable little 3 year old who has been sick for days who was asking for a cheetah costume.

She’s already determined to be a cheetah for Halloween.

Now you would think being a typical kid she would drop this idea in a week and be onto the next costume. But not this girl. A year ago we had a Mary Poppins birthday party for her. Roughly three days later she decided she was going to have a Wonder Woman party for her next party. And low and behold, here I am making super hero cuffs for her party eleven months later.

After watching her with a runny nose and a terrible cough I decided to get this girl her cheetah costume.

The starting point for the costume was a black tutu my brother gave Caroline last year. It’s adorable and she loves it.

For the next part of the costume I headed to the mall.

Why not the fabric store you ask?

I just can’t stand in line with that big bolt of cheetah fabric. I think I would have to start talking needlessly to everyone in the line explaining why I would be paying money for gobs of  fabric which screams street walker to me.

Surprisingly, once you start looking, there is a lot of cheetah clothing out there.

Just walk into Forever 21 and scan for cheetah. You will be amazed at the ensembles you could put together.

Actually as I was on my hunt for cheetah I honestly did consider buying the camisole in size 3X and using the fabric to make a cheetah shirt for Caroline. Again, I’m sure I would have found myself explaining the purchase to the saleslady.

Ultimately, I found cheetah leggins in Dillard’s for $12 and was happy with that.

Then I walked into Janie and Jack.

My eyes saw this skirt.… 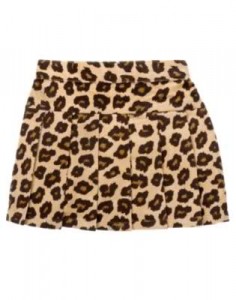 Nope. She already has her tutu. Don’t need it. 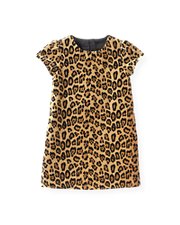 Don’t need it but it would be perfect if she wanted to be Jane of the Jungle the following Halloween.

I passed by hair bows, coats, socks, and purses – all cheetah print.

And then I saw it… 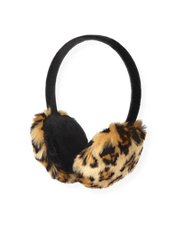 Yep, for $7 these cheetah ear muffs were mine. And Caroline’s. I knew she would love them. They’re just crazy but make perfect cheetah ears.

And I was right. She loved them.

So for the past two days she has worn her cheetah leggings, cheetah tutu, and cheetah ear muffs going growl, cough, growl, cough.

No shirt but really, who needs a shirt to distract from all that cheetah goodness.

So there you have it. Halloween costume#1 is partially done.

We still need to add a black shirt and claws but I’m hoping to wait her out until at least June.

This entry was posted in caroline, clothes, dress up, family, observations, parenting. Bookmark the permalink.