In an effort to have my boys try more food I took them to the grocery store to choose something for dinner.

My rule was the food needed to be something neither of them had ever tried.

We walked past the fruits and vegetables and nothing caught their eye.

The seafood department was different. I blame it on the worker who offered to take out a lobster for them. They were fascinated, getting to touch it and ask questions about the animal.

So they lingered in the seafood department and chose fish as their item to try.

Alex picked out some tilapia fillets while Andrew decided on catfish.

They decided to make their own fish sticks so we bought a fish fry mix as well.

Once we were home, the boys were very involved. Alex made the batter and they both dipped the fish. 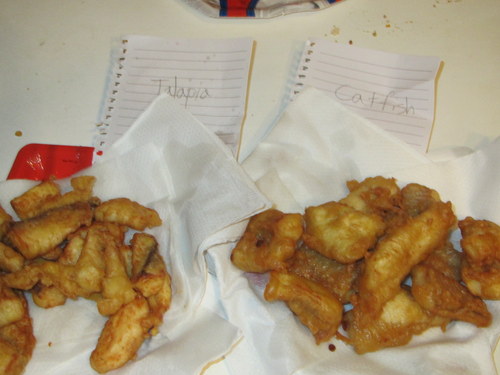 Doesn’t quite live up to the Pepsi vs. Coke taste test hype but it worked.

Everyone had to taste both kinds of fish and give their vote as a favorite.

Alex loved the tilapia and ate several pieces. Of course, anything covered in tons of ketchup is always good. One vote for tilapia.

I chose the catfish as my favorite. One vote for catfish.

My husband chose the tilapia. Two votes for tilapia.

The deciding vote was all Andrew’s. Either a clear winner was about to emerge or he would declare a tie. This was his moment.

But …he was convinced we were trying to poison him.

At this point he’d eaten roughly one millimeter of the fish fry coating.

Suddenly our fun experiment had come to a screeching halt. Just to be clear we were taste testing FISH STICKS! It can’t be that bad.

Maybe I should have just poured some Pepsi into a cup for them and called it done.

And so…the tilapia won by default.

I will call this experiment a success still and bring them to the store to choose something new to try. I’m not sure what item they will choose next but I can assure you when we walk past the seafood section Andrew will say, “There’s the catfish that I tried. It was gross. It made me cry.”

This entry was posted in Alex, Andrew, food, observations, parenting. Bookmark the permalink.