I took my kids and one of their friends to the dollar show on Monday.

It was President’s Day and the place was swamped.

I had to drop the oldest two off and have them stand in line while I parked the car.

Several movies were already sold out so we made contingency plans in case ours was sold out by the time we got to the ticket counter.

“I only want to see Tin Tin if Arthur’s Christmas and the Muppets are sold out.”

“I really want to see the Muppets but will go see Tin Tin as my second choice.”

“I already saw the Muppets and Arthur’s Christmas so I want to see Tin Tin.”

Thankfully we didn’t need to come to a concensus since our movie was still available.

I ushered us all into the building only to find the concession stand line was enormous.

Not really a problem for us until my son’s friend said, “I want to buy something.” 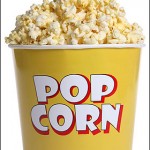 I left the two of them to stand in line together while I found seats with the youngest two.

Thankfully we got great seats and were settled in no time.

But the 9 year olds didn’t come back.

I was starting to get a neck crick and strange stares from the people behind me since I kept turning around to look for the boys.

The theater was packed by now and I was having to fend off desperate moms and grandparents who were looking for extra seats.

Finally they returned when the movie started and I was able to enjoy the movie.

That is until about three fourths of the way through the movie when my daughter had decided she had seen enough and wanted to leave. I was able to use my mom negotiating skills and convince her to sit on my lap for the next 20 minutes. Some talk of candy when we got home might have been whispered several times.

After the movie I got everyone to the car and congratulated myself on a successful outing. We rarely go to the movies so in my mind this was a nice treat, especially getting to bring a friend along.

As we were driving away I heard the friend say, “I wonder why the movies were so crowded today?”

My nine year old volunteered, “Well, it’s Presidents Day and kids don’t have school. Their parents probably took them to the movies because they didn’t know what else to do with them.”

After hearing that I can assure you that I know exactly what my children will be doing on the next school holiday.

It starts with CHORE and end with an S.

I’ll be on the couch watching Parenthood reruns.