They might describe going to the movies as delightful, desirable, and divine.

After the end of my most recent 3D movie experience, I would not.

I would define my experience as distracted, disruptive, and a deterrent to ever returning.

Last week my mom and I brought my kids to see Kung Fu Panda 2 at the dollar show.

Besides just being happy about going to the movies, my boys were thrilled it was going to be a 3D experience.

“We get to wear those glasses!”

Once we had settled into our seats and the lights went out I distributed the snacks. I passed out the theater bought ICEES and the smuggled in microwave popcorn (much to the chagrin of my mother).

Discarding her 3D glasses during the opening credits, my daughter was content to watch the movie without them while eating her animal crackers. Once the crackers were gone though she was ready to move.

After attempting to distract her several times and watching her run up and down the aisles, I took her out to explore the lobby. 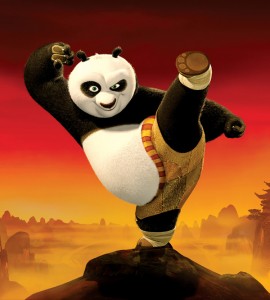 Thankfully, the movie ended soon afterwards and we were able to scoot back to our seats to collect the rest of the family. As a group we walked to the back of the theater where the glasses recycling container was located.

While holding Caroline, I reached into my bag in order to retrieve our two pairs of 3D glasses. I pulled out 2 pairs of glasses and tossed them into the container.

Within moments I realized my mistake.

I had thrown my sunglasses into the recycle bin. 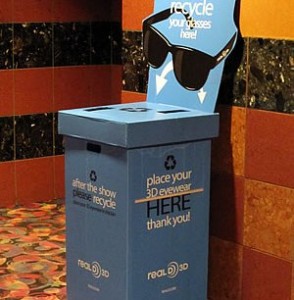 I ripped off the top of the receptacle and leaned into it but was only able to graze the top layer of glasses with my hand. Due to the dim lighting in the theater I couldn’t determine if any of the pairs I managed to grab were my sunglasses.

However, it was not dark enough to miss the strange stares I was receiving from audience members waiting to turn in their glasses.

Ignoring their stares I decided to drag the container into the hallway.

Once in the hallway, I pushed over the bin causing all the 3D glasses to spill on the floor.

There was a noticeable look of concern from the teenage ushers suddenly walking our way. Avoiding their stares I searched for my sunglasses until my nine year old declared, “I found them.”

I could swear I heard music. It was like the holy grail. Light shone from the heavens onto my son’s extended arm.

Much to the delight of the ushers I turned the bin right side up and placed all of the glasses back in. I was going to drag the beast of a container back into the theater but was quickly told, “Thank you Ma’m. We’ve got it from here.”

I’m pretty sure they had already walkie talkied back to the front office about the crazy lady by theater four.

Delightful, desirable, and divine? No.