Winter is always a good time to hop in bed, snuggle in with the comforter, and read a good book. I’ve read a few books recently that I thought you might be interested in.

The Sisters: A Novel – Nancy Jensen 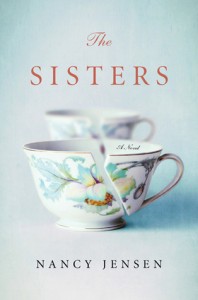 From Amazon: Growing up in hardscrabble Kentucky in the 1920s, with their mother dead and their stepfather an ever-present threat, Bertie Fischer and her older sister Mabel have no one but each other—with perhaps a sweetheart for Bertie waiting in the wings. But on the day that Bertie receives her eighth-grade diploma, good intentions go terribly wrong. A choice made in desperate haste sets off a chain of misunderstandings that will divide the sisters and reverberate through three generations of women. What happens when nothing turns out as you planned? From the Depression through World War II and Vietnam, and smaller events both tragic and joyful, Bertie and Mabel forge unexpected identities that are shaped by unspeakable secrets. As the sisters have daughters and granddaughters of their own, they discover that both love and betrayal are even more complicated than they seem. Gorgeously written, with extraordinary insight and emotional truth, Nancy Jensen’s powerful debut novel illuminates the far-reaching power of family and family secrets.

I stayed up late reading this book and it was definitely well worth. Mabel and Bertie were close sisters until one fateful day which instantly changed their lives.Misunderstandings and missed opportunities led to them to search and wonder about each other for the rest of their lives. This novel follows the women and their families and brings you into their world, silently cheering them on as you read.

The Sisters from Hardscarbble Bay by Beverly Jensen 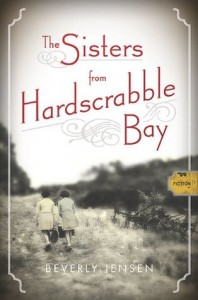 From Book List: Jensen’s tale of two sisters begins in New Brunswick. When their mother dies, Idella and Avis are left in the care of their father, who is overwhelmed by the tasks of raising a household of several young children and eking out a meager living on a potato farm. The book—a series of interconnected stories, really—follows Idella and Avis as they grow up and move to America. Idella ends up in Maine with a wandering husband and a frightful mother-in-law. Avis, the wilder one, lives in Boston and goes through what she describes as “a shitload of men.” The book encompasses more than 70 years, and the early chapters, especially the one in which a French Canadian girl named Maddie comes to help out on the farm, are the strongest. If the later sections read more like family memoir being forced into a fictional shape, they are nevertheless notable for vivid writing and strong characterizations. Jensen died before seeing any of her work published; this is a fine tribute. –Mary Ellen Quinn

This book covers more than 70 years of Idella and Avis’s lives and while the girls stick together through life, life isn’t always very kind to them. The first half of the book is much better than the second half though I kept reading because I wanted to see where the girls would end up in life. It’s definitely a good book and worth a read. 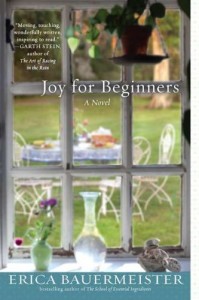 From Amazon: Having survived a life-threatening illness, Kate celebrates by gathering with six close friends. At an intimate outdoor dinner on a warm September evening, the women challenge Kate to start her new lease on life by going white-water rafting down the Grand Canyon with her daughter. But Kate is reluctant to take the risk. That is, until her friend Marion proposes a pact: if Kate will face the rapids, each woman will do one thing in the next year that scares her. Kate agrees, with one provision – she didn’t get to choose her challenge, so she gets to choose theirs. Whether it’s learning to let go of the past or getting a tattoo, each woman’s story interweaves with the others, forming a seamless portrait of the power of female friendships. From the author of The School of Essential Ingredients comes a beautifully crafted novel about daring to experience true joy, starting one small step at a time.

The idea behind this short book intrigued me, do one task that scares you and it could change your life. When you read the tasks each woman is assigned, you think it would be no big deal to complete them. But what you learn through the course of the book is how profound these small tasks are for each woman and what they really entail.

Calling Me Home by Julie Kibler 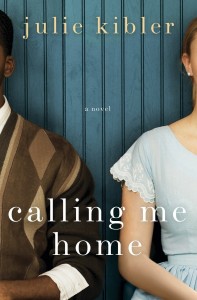 From Amazon: Eighty-nine-year-old Isabelle McAllister has a favor to ask her hairdresser Dorrie Curtis. It’s a big one. Isabelle wants Dorrie, a black single mom in her thirties, to drop everything to drive her from her home in Arlington, Texas, to a funeral in Cincinnati. With no clear explanation why. Tomorrow. Dorrie, fleeing problems of her own and curious whether she can unlock the secrets of Isabelle’s guarded past, scarcely hesitates before agreeing, not knowing it will be a journey that changes both their lives.

This book was a last minute selection at the library and I’m so glad I grabbed it. This story really and truly breaks your heart for Ms Isabelle. She’s a feisty and independent ninety year old who needs help completing one last task in life. In fact, her character reminds me a lot of the old woman in the movie Driving Miss Daisy. This is Kibler’s debut novel and I hope the first of many more heart grabbing novels.

Any book suggestions for me?