I’ve completed a little summer reading and have a few to recommend. Amazingly, all three of these books were chosen while I was walking the library aisles. Enjoy! 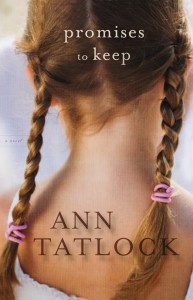 Promises to Keep by Ann Tatlock

From the back cover: Eleven-year-old Roz (Rosalind) Anthony and her family have just moved to Mills River, Illinois, to escape an abusive situation. Only days after settling into their new home, they are surprised to find the previous owner, Tillie Monroe, on their front porch reading the newspaper. Though her sons have sold the house and sent her to a facility for the aged, she is determined to die in the place she lived her life, and somehow manages to find her way “home” day after day. Feeling sympathy for the elderly woman, Roz’s mother allows Tillie to move back in. Mara Nightingale becomes Roz’s first friend in Mills River. In spite of their many differences, the girls discover they have something in common that binds them together–both are hiding secrets. So they make a promise–“cross my heart and hope to die”–never to tell anyone else.

Although this book is slightly predictable, it was very enjoyable. I was drawn into the characters and especially admired the gumption of Ms. Tillie. Imagine moving back into your house with the new owners! Tatlock writes in an easy and familiar style moving easily through both funny and tense moments. Go ahead and give this book a try.

I give Promises to Keep 4 out of 5 stars. 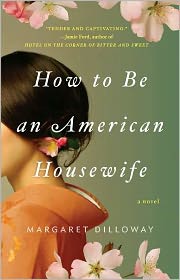 How to be an American Housewife by Margaret Dilloway

From the back cover: How to Be an American Housewife is a novel about mothers and daughters, and the pull of tradition. It tells the story of Shoko, a Japanese woman who married an American GI, and her grown daughter, Sue, a divorced mother whose life as an American housewife hasn’t been what she’d expected. When illness prevents Shoko from traveling to Japan, she asks Sue to go in her place. The trip reveals family secrets that change their lives in dramatic and unforeseen ways. Offering an entertaining glimpse into American and Japanese family lives and their potent aspirations, this is a warm and engaging novel full of unexpected insight.

This book was an easy read due to the short chapters which are narrated alternately by the mother and daughter. I was able to read several chapters a night although I never really wanted to put the book down. While the book starts out light hearted, the reader quickly realizes Shoko carries a deep amount of emotional pain which guides the story. Dilloway’s own mother grew up in Japan and came to the United States after marrying her American husband. Her mother’s experiences enable Dilloway to give accurate glimpses into the Japanese culture and some difficulties of adjusting in America.

The Wives of Henry Oades by Johanna Moran

From the back cover: When Henry Oades accepts an accountancy post in New Zealand, his wife, Margaret, and their children follow him to exotic Wellington. But while Henry is an adventurer, Margaret is not. Their new home is rougher and more rustic than they expected—and a single night of tragedy shatters the family when the native Maori stage an uprising, kidnapping Margaret and her children.

For months, Henry scours the surrounding wilderness, until all hope is lost and his wife and children are presumed dead. Grief-stricken, he books passage to California. There he marries Nancy Foreland, a young widow with a new baby, and it seems they’ve both found happiness in the midst of their mourning—until Henry’s first wife and children show up, alive and having finally escaped captivity.

Narrated primarily by the two wives, and based on a real-life legal case, The Wives of Henry Oades is the riveting story of what happens when Henry, Margaret, and Nancy face persecution for bigamy.

Set in the late 1800s, this book will draw you into the story and make you feel like you are there. I almost turned this book back into the library without reading it and I’m glad I decided to keep it. This book is definitely a page-turner which is now on my all-time favorites list. The unique storyline immediately kept my attention throughout Margaret’s journey and later her integration of Henry’s second family. Throughout the entire reading of this book I pondered “What would I do in this situation?” Place this book at the top of your reading pile.

Do you recommend anything you’ve read this summer?