We love King Cake around here.

Every time we have king cake the boys mention to each other, “Mom got king cake at school every week when she was little.” I try to tell them it only occurred during Mardi Gras season but I can’t deter their thoughts of what a pitiful school experience they are having compared to me.

My mom sent us a Randazzo’s king cake for Derek’s birthday. It was devoured in 3 days. The only reason it wasn’t gone faster was because I wouldn’t let them have it for breakfast. Alex “got the baby” in the Randazzo king cake so he knew it was his turn to provide the next cake.

Occasionally, Alex would remind me it was his turn to buy the next king cake . Our neighborhood grocery store was the only place which came to mind for buying a king cake but frankly, they looked quite unappealing to me.

While browsing the magazine section one day in Lowe’s, I started flipping through a Sandra Lee magazine. Behind all of the Valentine treats she was featuring was a small section on Mardi Gras recipes. Gumbo, etouffee, and king cake were listed as well as dirty rice.

While reading I whispered, “Homemade king cake.” Alex was at my side in a second. “Oh, can we try? Can we make that tonight?” Seeing as it was already 4:45 I appeased him by buying the magazine and promising to make the dessert soon.

A few days later, after gathering the supplies, I decided the time was right to make the king cake. We were once again stuck in the house all day due to ice. I was desperate for an activity (and frankly, something sweet) so I told the boys we were celebrating Friday night dessert early because of the weather.

Here’s a picture of our ingredients: 3 cans of cinnamon rolls with icing (we didn’t use the extra one shown here), a plastic baby, and sprinkles. Our sprinkles are not the traditional gold, purple, and green since we used what was in the pantry. 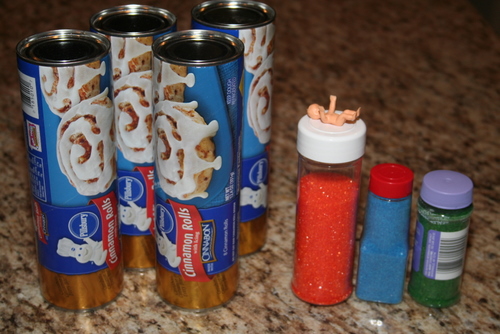 1) First we buttered the baking sheet.

2) We unrolled the 3 cans and separated each cinnamon roll. 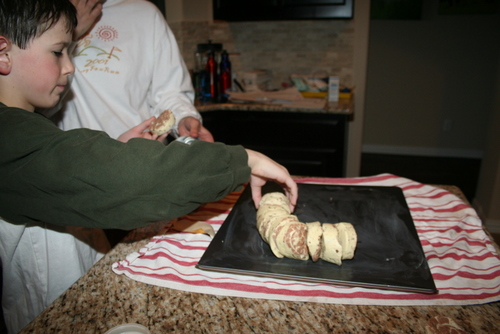 3) We then formed an oval shape with the rolls. Sandra Lee suggests using 5 cans of cinnamon rolls but I thought that would be a tad gluttonous for us. 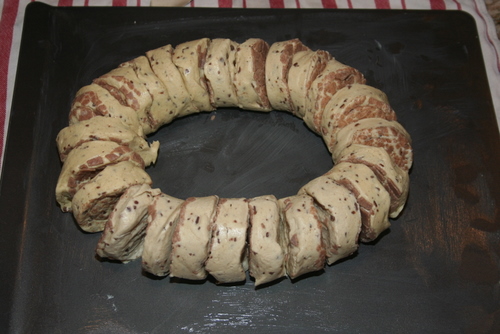 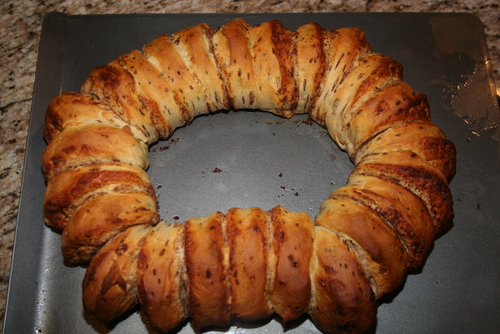 5) We waited 15 minutes for it to cool (Next time we’ll try 5-10 minutes) , covered it with the cinnamon roll icing, and then covered with sprinkles. 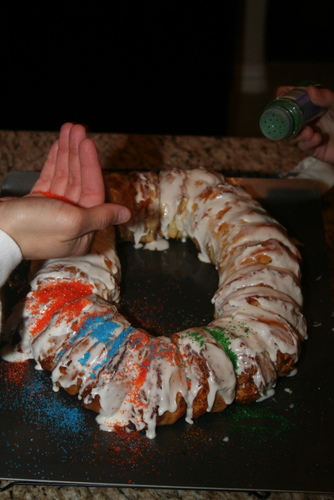 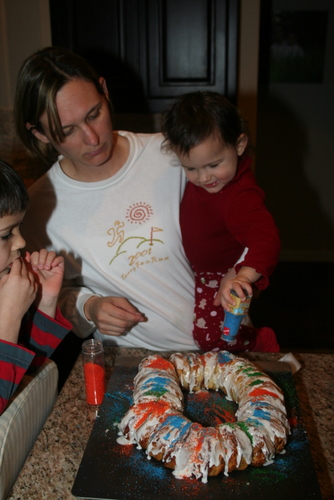 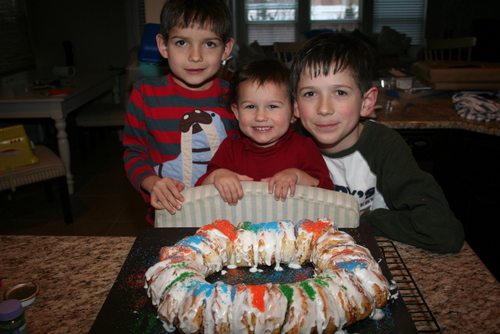 Considering they each ate the king cake 3 times in 24 hours I’d say it was a big hit. (By the way, Andrew got the baby this time).