As I mentioned in a previous post, Derek and I have made some financial goals for our family this year. One of the ways I was going to directly help was keeping an eye on the food budget.

January’s goal was to spend $125 less on groceries/eating out a month (compared to 2010 monthly average).

Before I give you the results, here are a few “happennings” concerning eating during the month:

Derek’s birthday dinner, cookie cake for $24.95 (yes, I could have made one, no it would not have been as good), ladies night out for me, kids eat free night at BBQ place, Ben & Jerry’s dessert trip, Double Dip trip for dessert, coffee and breakfast for a friend, several meatless nights, bought diapers and wipes (yes, that’s included in this budget for us), several impromptu visits to CVS for gatorade due to the flu, and we ate out on several occasions.

So…how did we do……..(drum roll here people, work with me)

What was the key to our success you might ask? Well, let me tell you. I ignored looks from my husband when I knew he wanted to go out to eat. No, seriously, I think it was our meal planning and cooking some meals ahead of time. It’s always easy to go out to eat when nothing is prepared at home. But if there is a casserole already sitting in the fridge, we’re more likely to go home and eat it.

I used this little form to keep track of all the food purchases. The form actually has 2 months on it. I cut off the top section to keep in my wallet for January and will use the bottom section for February.

It helped me keep a constant watch on what we were spending.

Here’s a peek at our January form filled out. 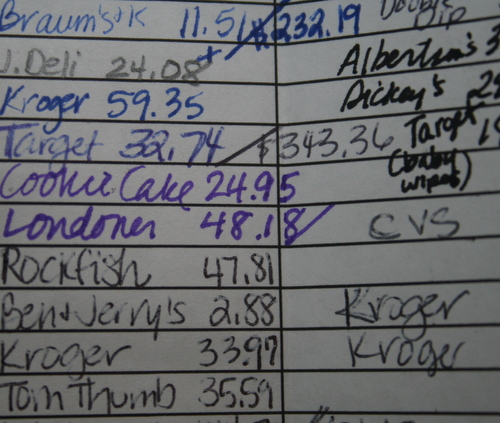 Thank goodness my birthday is today, February 1st. Just in time for our food budget to be huge. We are going to eat like kings tonight. Who cares if we have beans and toast the rest of the month. OK, maybe not but it’s fun to dream.

Now onto our February goals.

1) February’s goal is to spend $175 less on groceries/eating out a month (compared to 2010 monthly average).

Yes, we were very successful in January, but anything can happen and I’d still like to consider $175 a big achievement in the end.

2) February house goal: anything we buy for the house (decorations or furniture) has to come from money we earned by selling items on craigslist or ebay.

We have several items in our house which I’ve wanted to get rid of and replace for a long time. Sometimes it’s hard to justify getting a new lamp when the one you have works just fine. This goal could be a total disaster but I think it’s worth a shot. Don’t worry, I bought a gallon of paint last weekend so we would at least have a project to work on while we figure out this whole craigslist game.

So that’s what’s new with us in the goals department.