My Super Bowl victory has nothing to do with the Packers or the Steelers. My victory is one between man vs. food. Okay, woman vs. food. I’m talking about the ever elusive perfect potato salad. More specifically…my mom’s potato salad. I have dreamed of making it for years.

My mom makes the best potato salad. At every family gathering, whatever time of year, this dish makes an appearance based on popular demand. Now you may have this dish down pat but remember I am not a cook. The prep time, the layering upon layering of ingredients, and the need to chill overnight, were daunting to me.

I was always intimidated. But no more. I have conquered my potato salad fears and come out the victor.

Last year I asked my mom to let me help her make the potato salad so I would learn the process. I watched as she created it layer by layer but I was sure I would never be able to recreate it. I’d like to say I promptly went and tried to make it soon after but that would be a lie. I didn’t even think about attempting it until a few days ago.

For some reason I felt sloppy joes and potato salad would be perfect for Super Bowl Sunday. I bought the ingredients and waited until the kids were in bed on Saturday night. I read the recipe several times. In fact, I read each step several times. I put the finished product into the refrigerator and hoped for the best on Sunday.

Now I’m going to go through the family cookbook to figure out what recipe to try next! 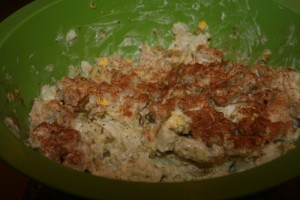 Do you have a family recipe you’ve always wanted to master?

6 Responses to My Super Bowl Victory